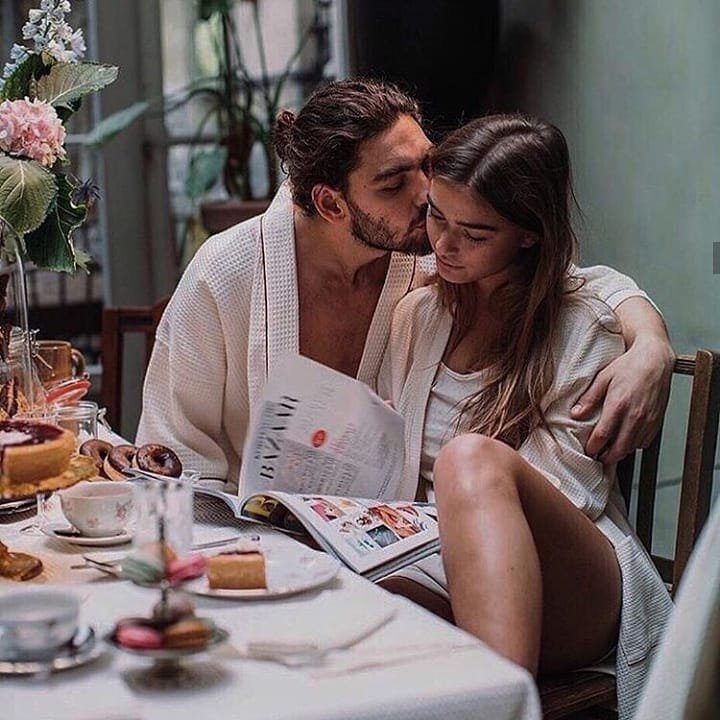 Guys can be a bit hard to read at times and that's why it's pretty difficult to be completely sure if a guy likes you. Throughout my teen years of dating, it was hard to tell if a guy was being sweet just to “get some” or if they were being sweet because they actually liked me. If you are in a confusing relationship or for those future confusing relationships, I would like to give you 15 ways to be completely sure a guy likes you, so listen up girls and get ready to know if that guy you are dating really digs you or if he is just playing you...

1. He Tells Someone about You

So you've been flirting with this guy and he's been flirting back. Does it mean anything more to him? If he really likes you, he is going to tell someone about you. If he tells a mutual friend that he would like to get to know more about you and also asks others questions about you, he definitely likes you. His questions show that he has more than a casual interest in you.

Even though the guy is sitting way across the room, that look he gives you will say it all. If he looks at you with wonder in his eyes and is always making eye contact with you, this is a good sign. After all, eyes are the windows to the soul, right?

If he's interested in more than small talk with you, this could be a sign that he totally likes you! He'll try to find common ground with you and ask you questions that allow him to get to know you better. You'll know that he's a good listener if he uses that information you told me in another future conversation.

4. He Shows up Unexpectedly

If he shows up out of nowhere, then it is obvious that he really likes you. Guys will always try to pop up "coincidentally" to get your attention. Whether he's hanging out by your school locker, joining the same extracurricular club you're in, or just catching up with you outside, he wants you to notice him. This is major effort from his side!

The reason I ask is because if you are a happy person, then who would not like you? Of course he likes you! If you always appear sad and depressed, then now may be the time to start working on that. Take a look at your body image, your future, the resources, the possibilities and your plans and stay positive! Change is hard but if change can make your life happier...why not!

6. He Babbles on when You Are Talking

The both of you talk and talk without allowing any form of silence. Girl, this is a good sign that he is into you. Silence is death. There is nothing worse than sitting there completely silent. Lack of communication is a definite relationship deal breaker! When a guy is trying to connect with you, he will babble on and hope that he gets your interest.

7. He Tries to Relate to You

In many ways, the guy tries to relate to you. If he tries to relate to you, then that definitely means that he is interested in you. When guys are interested in you, they share their experiences, interest and even their pet peeves with you. That is him setting up compatibility. The morestuff you do together, the better you will relate with each other.

8. He's Always Smiling at You

When a guy is into a girl, he will constantly smile at her. Do you catch him doing that? When a guy smiles at you, that is generally indicating some type of approval. A smile is one of the best self-esteem weapons you can find, so use it. Don't be shy!

9. He Admits Something Embarrassing to You

If the guy admits something embarrassing to you, then he is into you. Some guys will share oddities about themselves in order to break the ice and to show you that they are real. And most importantly it shows that he is absolutely comfortable with you.

10. Makes Fun of You in a Harmless Way

When a guy is into a girl he may make fun of her in a harmless way. This may be his way of trying to get you to laugh. If he starts cracking some jokes at something you have said or did, then this is his way of showing you that he is comfortable with you. Of course, if you think it's getting out of hand, let him know.

Is he always leaning in really close? Is he always finding excuses to touch you? Well, his body language is saying that he wants to be near you! Even if he's just got his arms around you, he likes being close to you. Relaxed body language means he's at total ease with you.

12. He Befriends Your Friends

If he goes out of his way to find common ground with your friends, it's a big sign that he likes you. He's interested in knowing the people you surround yourself with! Plus, he's probably trying to sneakily ask your best friend questions about you!

13. He Invites You to Family Functions

Men tend to introduce women who they see themselves being committed to to family. He sees you being apart of his future and that's why he has no problem with you meeting his parents! He wants them to get used to the idea of having you around, he wants you to be a part of the family!

14. He Keeps up with You on Social Media

I think a lot of people agree with me that social media is the easiest way to let someone know you like them. For example, if he's following you on Instagram and constantly "liking" all of your photos, it's a good sign! He likes keeping up with you and how you spend your days!

Here's your best sign yet. If he comes out and tells you, that's great! When a guy is really interested, he won't be afraid to admit it. Let him know that you feel the same way!

I hope these 15 ways help you deal better with those mixed signals that boys are oh-so-famous for. Any other signs that you have noticed when a boy is really into you? I'd love to know!