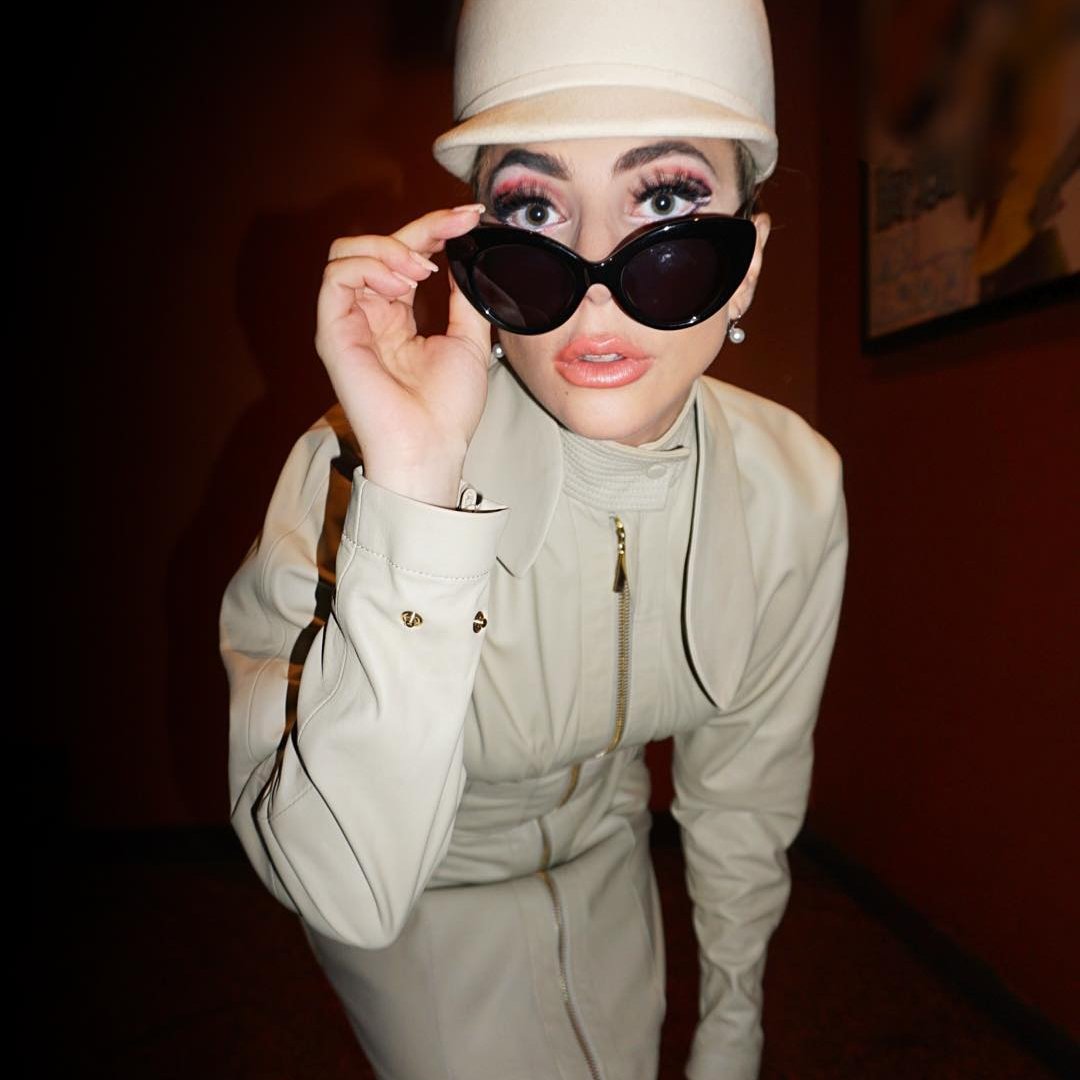 Pop sensation Lady Gaga recently stated “A girl's got to use what she's given, and I'm not going to make a guy drool the way a Britney video does. So I take it to extremes. I don't say I dress sexily on stage - what I do is so extreme. It's meant to make guys think: 'I don't know if this is sexy or just weird.’” Lady Gaga claims she spends hours coordinating her attire. I think using the word “weird” to describe her outfits is an understatement! In fact, in recent times I would have to say that she is the celeb with the worst fashion sense. I’m sure you’ll find this statement to be true after reviewing my list of the 10 weirdest Lady Gaga looks.

Lady Gaga claims she spends hours coordinating her attire? Or hours coordinating her face to go with her ridiculous outfits? This outfit looks like she spent the afternoon cleaning my chimney. On her way out of my chimney apparently her pants got snagged on a brick and ripped off. I don’t exactly know how to explain her bra being on the outside of her clothes. Is this girl for real? The cotton ball for hair and mask of black lace make this coordinated outfit just that more ridiculous. Can you believe she wore this to the Ace Awards?

One of the more “bland” but strange Lady Gaga looks is this blue sheet of a gown she has on. It seriously looks like she was getting ready and decided to put on her favorite curtains. She reminds me of Cruella Deville’s not-so-evil half-sister or something with that ridiculous fur draped over her shoulders. Surprisingly, her hair and makeup are normal for the night. After all, she was attending the Billboards 4th Annual Women in Music event — she didn’t want to look too “weird”.

One of the weirdest Lady Gaga looks by far is this red lace getup she wore to the MTV Video Music Awards in 2009. The design of the dress gives it an older woman look, aside from the fact that it’s see-through. At least she matched her undergarments with the dress this time! I do understand though that if I was wearing this outfit in a room of best dressed MTV Goers I would want to hide my face too! For all we know she could be accepting the “Weirdest Outfit” award! If they don’t have that award yet, they should make it in her honor.

The Michelin man has a sister! One of the weirdest Lady Gaga looks is the one she has seen here. It looks like she had another situation where she couldn’t find something to wear and decided to grab some trash bags and throw them on. The excuse she had is fashion. I think the only thing she should be coming up for an excuse for is why her sense of fashion is so uncoordinated. At least she has cute shoes on; maybe those will draw attention from the ridiculous sunglasses.

Who are you and what have you done to poor Kermit the Frog?! Is she for real? This Kermit the Frog getup has to be the absolute weirdest Lady Gaga look. Jim Henson would turn in his grave. I’m surprised she hasn’t been tackled by rabid pigs with long blonde hair. What will she do next for attention? Wear bubbles, trash bags, or curtains? Oh wait, she’s already gone there.

6. The Girl in the Bubble

One of the most famous weird Lady Gaga looks is the bubble wrap look! That’s right! Lady Gaga was wrapped in enormous bubble wrap. Do you think it’s all for fashion or fun? I think she gets off on people looking at her with a stupefied expression on their faces. How else would you look at one of these outfits? Underneath the bubble wrap she’s wearing one of her famous nude leotards and fish net panty hose. How creative… not! If you’re going to spend hours coordinating your look you should really try to use some real clothing somewhere in the mix.

One of the weirdest Lady Gaga looks is this bizarre blue and white china print piece with a matching hat. It reminds me of a print I’d find in my grandmother’s china cabinet. I don’t know what’s worse, the outfit or the hat? It reminds me of something you would see in the movie Fifth Element. I had no idea people wore these kind of things because they liked them! I could see being paid to wear something but wearing something like this because you like it?

Wow. She always out does herself when it comes to making sure she’s wearing one of her weirdest outfits. It’s like she goes out of her way to wear her underwear in public. The underwear at least matches her bra and over coat. Why did she match everything but her boots? Speaking of boots… I could understand a woman liking some thigh boots but with the ridiculous laces the boots just look sloppy. Of course anything to help her look weird!

This is by far the sickest display of “fashion” I’ve ever witnessed. The weirdest most bizarre Lady Gaga look I’ve seen. I could see if you were at an anti-fur rally and you threw blood on the fur to demonstrate how animals are tortured for our fashion, but seriously? Who puts fake blood on themselves and calls it fashion? At first the outfit appears to be perfect for a masquerade ball gone wrong complete with mask. Then at the end it’s just completely wrong! I really think that this woman should be taken in for a psychological evaluation! If she isn’t half man, then she’s definitely half crazy!

Last but not least one of the weirdest Lady Gaga looks is this rather goth look she displays here. Underneath all the nonsense accessories and feathers adorning her neck it appears that the dress itself was rather normal. Take it upon Mrs. Weird herself to ruin the only normal thing in her closet! The cluttered over-display of feathers reminds me of the Edgar Allan Poe poem “The Raven.” To top it all off, she found a matching black lace hat! I can’t believe she dresses like this in public. How bizarre!

I hope you enjoyed viewing and reading my opinions on the 10 weirdest Lady Gaga looks. Please do not take my statements personally if you are a fan of Lady Gaga. Her music and fashion have inspired millions, and there isn’t anything wrong with that. People are entitled to their different opinions but after all this topic is called “The 10 Weirdest Lady Gaga Looks,” so what else would you expect but weird looks and harsh critiquing? I think as she progresses and gets a little older her looks will change for the better… or so I hope! I just can’t stomach the idea of her having a fashion line and people all over dressing this ridiculously. What do you think of Lady Gaga’s fashion sense? Which of her looks do you find the most bizarre? Please let me know!