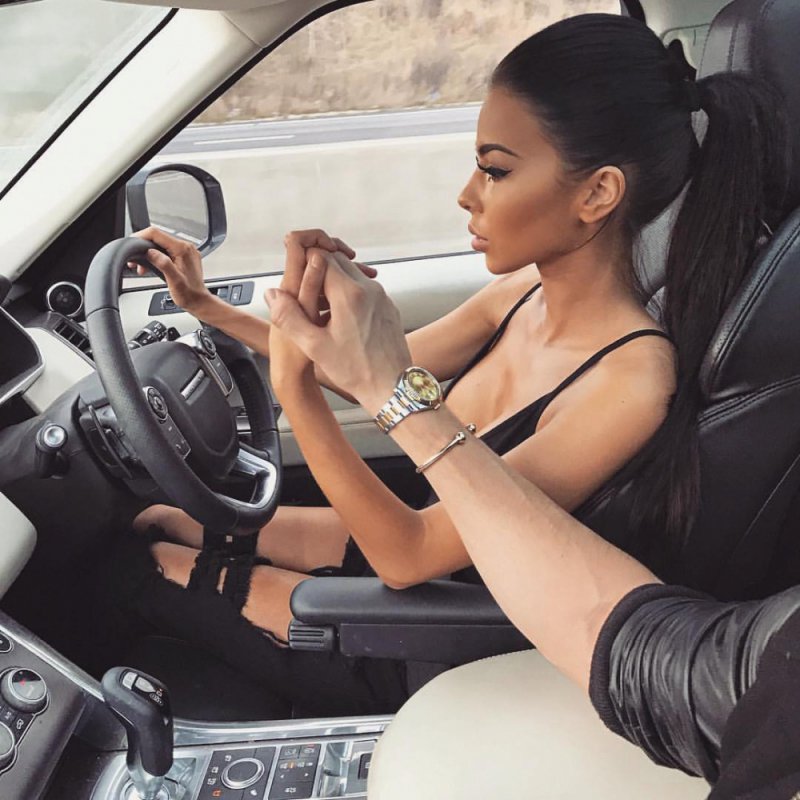 Whenever I'm trying to be more attractive to someone, I always optimize. Now, this doesn't mean I starve myself to look thin, buy tons of new clothes, or get a dramatic hair cut. Instead, I just try to make myself look my best. This means a cute outfit that emphasizes my best features, combed and fixed hair, a little makeup, a clean bright smile, and a spritz of light perfume. I do this for myself, so I can be confident in who I am.

Guys love to talk about themselves, and they think a girl who actively listens to them is so charming. So, I always listen more than I talk when I was trying to attract a guy. Talk about yourself, current topics, news events, etc about 20% of the time, and let him control the conversation about 80% of the time. If he is attune to women, he will ask you questions too and it'll develop into a nice little back and forth conversation!

Having a sense of humor is really important when you are trying to attract a guy. Laughing at his jokes and even knowing how to take a joke can really make a guy feel like he knows a girl instantly! If you've got a crush, laugh it up a little with him and see how he responds!

5. Have a Great Attitude

In my experience, guys like girls with cheerful, sunny dispositions. No one likes to hang out with a pessimistic, negative person. So, I always try to look on the bright side of life and be a "glass half full" person when I'm trying to catch a hot guy. People always tend to look my way more often and gravitate toward me when I've got a smile on my face! So flash those pearly whites!

Sometimes, I can be catty... all girls can be. When I'm with my girlfriends, we'll gossip or trash some other girl for being rude or trashy, but that's not a nice way to act. And, let me just tell you, I've learned that this kind of behavior doesn't attract guys. Boys are drawn to girls who are sweet and don't gossip, so keep cattiness and snotty comments to yourself around your new guy. The occasional catty comment is okay, but keep it to a minimum!

Some of my friends used to think flirting was beneath them, but I'm telling you - it works. Guys just love to be showered with attention and treated like a king. So, toss your hair a little bit, throw your head back and laugh, grin a lot, and look up and him from under your eyelashes. Even those these old tricks might seem tried and true, they're tried and true because they actually work!

Trying to be unique and different is a way I've always tried to interest guys. I don't want him to think that I'm just like all the other girls out there... instead, I want to be seen as charming, witty, and smart. So, I don't talk about all those same old topics, like school gossip. Ask him about how he feels about current events or newsworthy stories and show him you're worldy!

Everyone has a bit of charisma to them and a witty side, why not show that? I know it can be difficult sometimes, if you are around your crush, but don't get too tongue-tied and just go for it! Remember when I said that a guy likes a girl with a sense of humor? Show that side of yourself to him and be confident in who you are!

Guys love physical touch, and touching someone is a quick way to develop intimacy. So, when I'm trying to attract a guy's attention, I will look for ways to bring physical touch into play. For instance, I touch his arm lightly when I'm laughing at a joke, or I'll slap him on the knee playfully if he says something funny, or I'll touch his hand while I'm explaining something.

The old saying that the way to a man's heart is through his stomach isn't just an old saying for no reason- it's totally true! I always bake a little treat for a guy when I'm trying to make him fall in love with me, and then I just surprise him with it on a random day. When my husband and I were first dating, I left a bag of treats in his locker before every football game. He just loved it!

When a guy's trying to determine if you're girlfriend material, he will test you a little bit. My advice at this point is to give him his freedom, and that will send him right back for more. In my experience, if any guy ever got the impression that I'd try to tie him down, he'd be gone lightning fast. So, let your guy know that you value and respect his time with his friends, playing sports, or whatever it is he does in his spare time.

When I'm trying to get a guy, I play a little hard to get. I don't call him all the time, try to track him down, or generally make myself a bother. I want him to think that I'm too busy out there having a great time to bother with him, and that he better get in touch with me quickly if he's interested in sharing any time with me! Let him do the pursuing, and he'll be much more interested in you.

Okay, this seems a little creepy at first, but just hear me out. Whenever I want to impress or charm someone (not just guys, but anyone), I do a little physical mirroring. What this means is taking whatever physical action that person does, waiting about five seconds, and then copying the motion. For instance, if your guy rests his elbow on the table, wait five seconds, and then put your elbow on the table. Sounds silly, but it works! It creates a connection between me and the guy that he just can't explain.

Staring deeply into someone's eyes quickly ramps up the intensity of the connection between two people. So, if I'm trying to get a guy to fall in love with me, I stare deeply into his eyes while we're talking. Now, don't look too long, or you'll appear to be a stalker... but you definitely want extended eye contact. Remember the scenes in Twilight where all the sexual tension developed between Edward and Bella just based on eye contact? That's what I'm talking about.

Guys want someone that is confident and someone that is secure in themselves. Even if you aren't confident, don't worry, there are tons of ways to build it. Start small and just go from there. I know not appearing desperate is hard, but if you appear to have it all together and even play hard to guy? Your crush will like you even more!

Guys love someone they can trust. I learned the hard way that telling my girlfriends every thing about a new guy in my life wasn't the best idea. Word always gets back to the guy that I've talked about what he told me or told details about our time together, and he always bolts. So, discretion is the best policy. Don't tell your girls every little bit of your private conversations, and your guy will trust and respect you much more.

When I am trying to attract a guy, I don't want to be an open book to him. I've found that guys like a little mystery... they keep coming back for more if you leave more to find out. Think of your information, history, interests, etc. like a treasure hunt... give your guy little clues, but don't let him find the treasure right away. He'll want to keep calling and asking you out just to learn more about you!

19. Be Supportive of His Interests

Guys love it when a girl takes an interest in what he likes to do. Even if you don't necessarily like what he is into (like video games or sports!), just give it a try -- that way you can have some common ground. Guys, that also means that you'll have to take an interest in your girl's interests too! A relationship is a two way street.

20. Hold off on the Physical Intimacy

My last tip has to do with physical intimacy, or making out, heavy petting , or sex. If you truly want to make a guy fall in love with you, you've got to hold out on stuff like this for as long as you can. Most guys I dated and are friends with just go after a girl for the thrill of the chase at first. It takes time for them to realize that they actually care about the girl. So, hold off on physical intimacy to give your relationship a chance to develop first. Steve Harvey has written a hilarious book that talks about this exact idea!

There you have it... my top twenty tips for getting a guy to fall madly in love with you. Hopefully, with this beautiful weather we're having, we can get out of the house, get flirting, and meet some great guys! Do you have other tried and true tips for catching that great guy? Share them below!