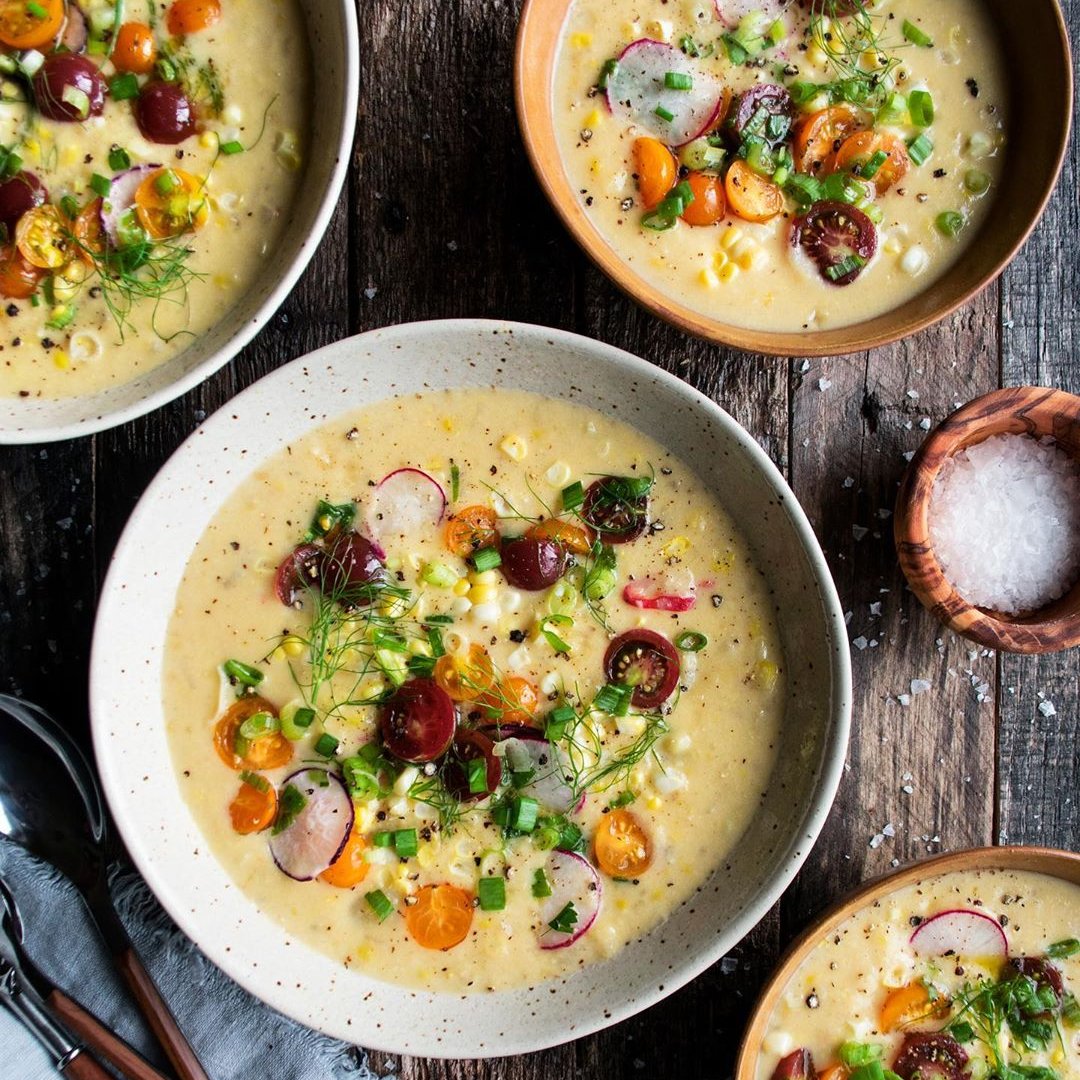 This is a soup I make often - a friendly staple in my cooking cycle, with variations. In part for my own reference , I'm planning on eventually setting down as many of these reliable dishes and methods as possible. I hope they will be of some use/interest to my reader/friends as well.

I don't refer to a recipe for chowders- I've been making them often since I started cooking, when I moved into a house with friends, in college. I'm pretty sure that my original was a corn chowder, from The Joy of Cooking, because it was so economical, and we did not usually have much to spend. I used canned corn, rather than fresh or frozen, as it was cheapest. It was always a big hit.

I tried other sorts of chowders the summer of my third college year. That August, working in a Wisconsin canning factory, on the "corn line", turned me temporarily against one of my favorite foods. A twelve hour day (including the ride to and from Madison on the factory bus); 10 hours handling corn cobs on a vibrating platform; below minimum wage (we were classed as agricultural workers); and a nightly hour washing the cornstarch out of my hair put me off corn, for a bit. I started substituting canned clams and so on. Shrimp were a later development, but have become a favorite, especially now that I find them often quite reasonably priced, on sale.And the corn is back, too.

Though I have no recipe, I do have a method. Some variation of this method appears in all the published chowder recipes I've seen, but chowder is a bit of a sacred cow. Regional variations are held to with partisan pride, and are generally unamenable to argument or discussion. I make no claims for this method, or its open-ended variations, in terms of authenticity. I'll just say, I think it's good. This is what I do, using shrimp chowder as an example:

Note: I save all shrimp shells in the freezer, in a plastic bag. That way, when I want a shrimpy broth for a seafood dish, I don't have to defrost my shrimp to make it ahead. This keeps the shrimp in the dish tasting fresher. The new shrimp shells can then go in the freezer for the next time. Obviously, if you want to start this cycle, you will begin with a shrimp dish not requiring any stock. The easy method for shrimp-shell stock can be found at the end of this post. You can use bottled clam juice, diluted with water, instead of the stock, and that will be fine.

Proportions and quantities of ingredients are best determined by your tastes, your pocketbook, and what is available. Keep in mind that this is a chunky soup, but not a stew. Also keep in mind that you will be adding milk, and/or cream towards the end, so it will be thicker than the final product 'til then. This is a full meal, if you add a salad and crusty bread.

Render a couple of slices of bacon in a big heavy pan or dutch oven. Remove bacon, crumble and save. Leave the bacon drippings in the pot. Over a medium low heat, sweat chopped onions, carrots, and celery until soft and the onion is transparent. Add generous amount of diced potatoes, herbs (except parsley and dill), salt and pepper, and pour in stock to cover by about 1 ". Cook until potatoes are done. Add milk or cream/milk combination, dill, corn and shrimps. Heat until almost boiling, but do not boil. Cook until shrimps are curled and done. Turn off heat and let the chowder sit uncovered for about 1/2 hour before serving, to blend flavors. Just before serving reheat, again without boiling, correct seasoning. Sprinkle each bowl with parsley and a bit of the reserved crisp bacon.I like to sprinkle some smoked spanish paprika over it, too.

Chowder always has potatoes, a bacon base, and onions, with a dairy component added later. It's lovely made with fish, and any number of other ingredients. You can easily invent a chowder of your own. Salmon chowder is interesting, and a bit different too. You can make it with salmon trimmings from the fish shop, and use the included bones for a stock, if you are so inclined, following the basic method for shrimp stock below.

Heat the oil in a big pot. Add the shells and tomato paste, and stir until it sizzles. Add everything else, and some S and P. Pour water over all, about a quart and a half. Bring to a boil. Cook 30 minutes- not much longer- the shrimp taste can be overpoweringly strong if cooked too long. Strain through fine sieve, pressing on shells and veg.

You can use this for a stock base for a gumbo, too.