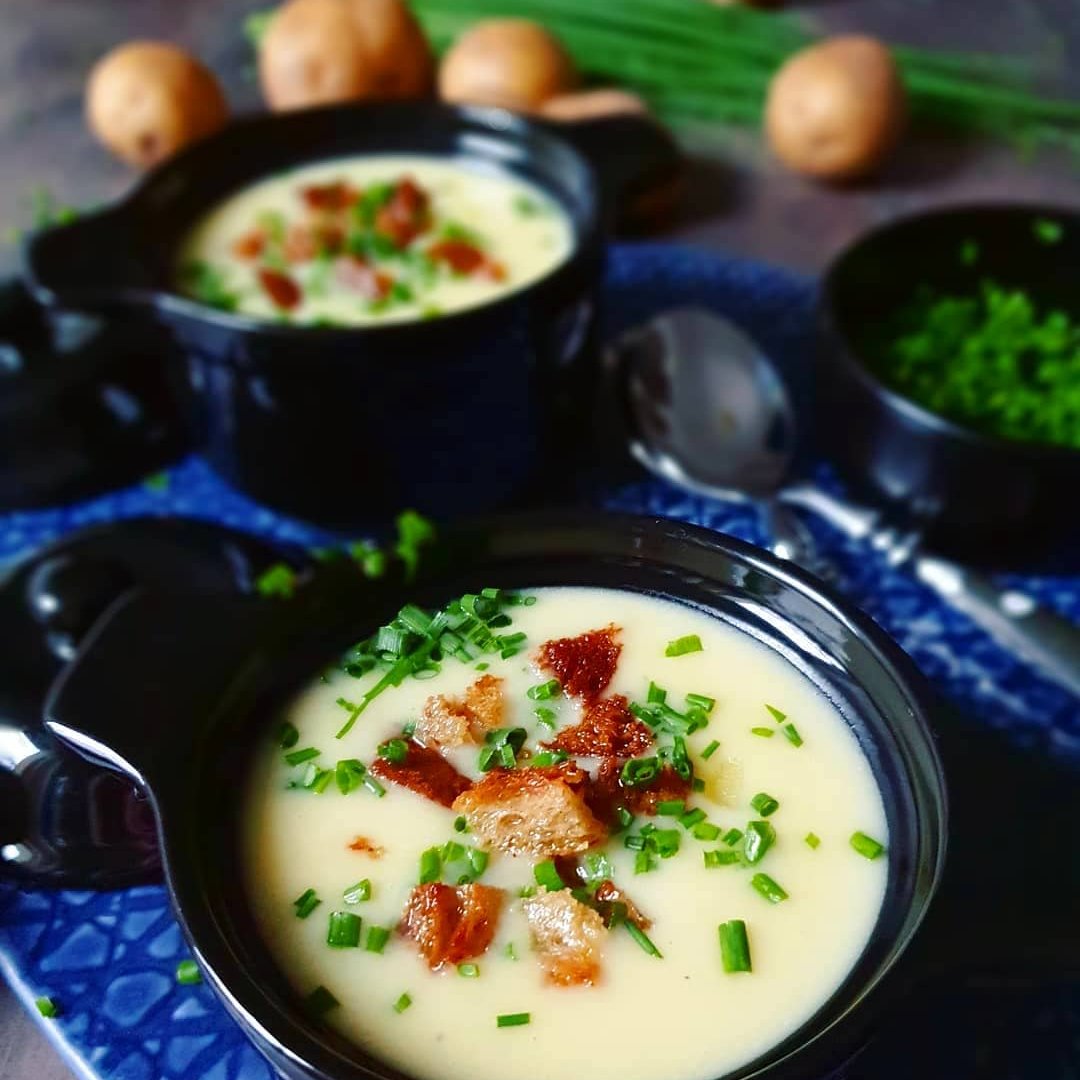 I have a new favorite potato soup, and this is it. I am fickle when it comes to potato soup; I like so many of them. Certain dishes I make over and over again, and eventually hone in on a version to keep. These vary a little from time to time, but the bones (not literal bones, you understand) of the method will be the same. Much as I love potato soup, I cannot commit to one in this way. As with rice pudding, I am always susceptible to a different, appealing version. This one is to die for, though.

It is simple, it is elegant, it is delicious. (It is also prettier than the photo; soup so often looks murky in my pictures.) I spotted the recipe in a library book I've been keeping at work, because it is too heavy to carry home on the bus. I forget the name-I will have to add it after checking, but it is a large survey of modern Spanish regional cookery. This soup came from one Laura Lorca, niece of the poet Federico Garcia Lorca, and it is an Andalucian recipe. Smitten as I was with that region when I visited (sadly, only once) the origin appealed.

The recipe called for cutting up the potatoes in a very specific, and rather odd way, so I did. I don't really understand why it should be important to cut the potatoes in this fashion. Now that I've done it though, and had such a good result, I will not want to be testing other methods to see if it's necessary. I wouldn't deal well with the disappointment if it fell short.

I should also mention that I did vary the recipe a wee bit, because I had all the ingredients in the house, sort of, just not in the precise form called for. I will tell you what I did, and where it varies, I will parenthetically add the original, so you can be authentic, if you wish. Here it is:

saffron, a pinch, pulverized in mortar

Peel and cut the potatoes into irregular chunks this way: Insert the tip of a small sharp knife into each potato, and twist it, until a chunk 1 1/2" pops out. Continue until you have reduced all your potatoes to chunky rubble. Heat the olive oil in a heay pot, at least 3 qt size. Add the almonds and garlic, and cook them over a medium heat, until they are golden-about 5 minutes, being careful not to burn them. Remove to a coffee grinder or mini processor and pulverize.

Add the potatoes to the pan, and stir them around for a minute or two. Add the broth, and all but 2 tsps of the pulverized almond mix. Bring to a boil, and turn down to a simmer. Dissolve the saffron in about 2 tbsps of the soup, and let it sit for a minute or two. Add it to the soup, with salt and pepper. Cook for about 25 minutes, at which point you should be able to crush about half of the potatoes with the back of a big spoon. Do so.

Mix the vinegar with the remaining almond mix, and stir into the soup. Garnish each bowl with the chopped parsley and bacon (ham). Consume with a coarse thick country type bread.

I will just say that the chicken stock I used was a particulary nice batch, and I would be fussy about the sherry vinegar too. I slurped up every last drop of my 1/2 of this soup. I could have eaten more. It will serve 4 normal people.

Addendum: The book is called The New Spanish Table,and it is by Anya von Bremzen.