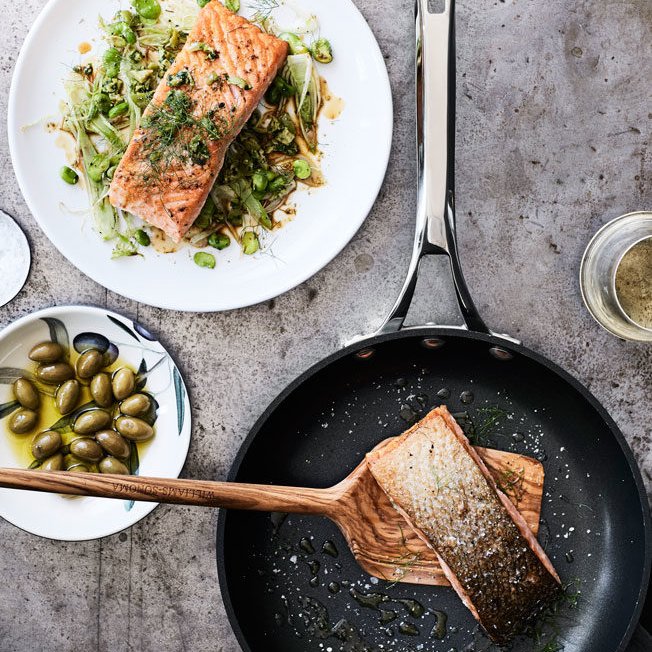 There is a number of ways you can prepare salmon since generally it is not considered to be safe to eat it raw. Some traditional methods of preparing salmon such as curing it are still considered “raw”. But when it comes to other ways of cooking your salmon, how to prepare it and at what temperature? It turns out that the answer lies in the cooking method you choose!

A hot and quick way to make salmon is to cook it at 425 degrees for 20 minutes. If you marinate it, then it might take 30 minutes to cook.

You can pan sear salmon and enjoy it. If you know that the salmon is safe, you could sear one side of it for two minutes, flip it over, and then turn off the heat. Cover the pan to trap that heat inside. Then give it four minutes to cook the other side. Note that this should only be done with thin fillets. Otherwise, you don’t get it hot enough. How hot does the salmon need to get? The Food and Drug Administration or FDA recommends cooking salmon until the internal temperature is at least 145°F. That would be the temperature inside of the middle of the thickest portion of the salmon filet.

You can reduce the odds of overcooking it by cooking it in a way that locks the juices in. For example, you could cook salmon by wrapping it in two layers of foil along with your preferred spices. Dill and lemon juice are a good combination, while lemon and butter is a classic. Wrap it and cook it at 375 degrees for around 20 minutes, assuming it is a two-pound piece of salmon.

Baking is a good option if you’re cooking smaller single-serve portions. That would be about six ounces per fillet. You can cook these by cooking them at 400 to 425°F. Don’t cook large slides of salmon at that temperature or you’ll overcook the outside by the time the inside gets warm enough. If you want to bake a large side of salmon, then you could bake a two-pound side of salmon at 375°F.

Don’t overcook the salmon. This will make it dry, caulky and stringy. It will turn an opaque orange color all the way through while drying it out. Adding foil will lock in moisture, though it adds to the cook time. On the other hand, thinner and smaller pieces can cook faster at a higher temperature. Ironically, farm-raised salmon tends to be thicker, so it typically needs more cook time than wild salmon. Yet you may not have a perfectly flat slab of fish. So how do you know when the salmon is hot enough?

You want to pull the salmon out of the oven when it is almost done. You should pull it out when it is almost fully cooked except for at the thickest part. You’ll know it isn’t done when it is still translucent. Then you could pop it under the oven broiler at 450 degrees to give it a nice finish while cooking it the rest of the way through.

If you’ve taken it out of the foil but you aren’t sure if it is completely cooked, you can remove it from the oven, cover it with foil, and let it ferment in the heat for several more minutes. It is hard to overdo it when you do it this way. Just make sure the Salmon internal temp is close to 140° when you take it out to “rest” wrapped in foil.