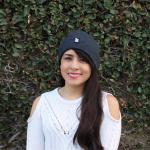 Natalie Rodriguez is a writer, filmmaker, and mental health advocate based in Los Angeles, California. In 2014, she graduated with her Bachelor of Arts in TV-Film from CSU Fullerton. A few months after graduation, she was then selected as one of the ten screenwriters for actor James Franco's first Studio 4 (LA) Master Class. She was also a freelance screenwriter for videos on Opposing Views and This is Now.

Her other writing projects have been published and featured on many websites including Amazon Books, The Huffington Post, Zooey Deschanel's Hello Giggles, TheRichest, TheTalko, and TheThings. Some upcoming publications include her first story about night terrors and PTSD, "Inner Child," on The Stray Branch.

Her Young Adult manuscript, "Elephant," is in consideration with a few literary agents. She is also working on the book adaptation of "The Extraordinary Ordinary," as well as a children’s story called, “Matty Cat.”

Natalie can be contacted via email natchrisrod@gmail.com. Follow her at @natchrisrod and @theextraordfilm and visit her websites, nataliecrodriguez.com imdb.me for the latest and upcoming projects.