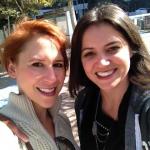 Christie Insley moved to LA to pursue acting, but has spent the majority of her time working in the animation industry, which is where she met Anndi. Christie suffered from anorexia as a teenager, but recovered and is now focused on just living a happier, healthier, cleaner lifestyle. Like Anndi, she's passionate about health and women's issues and so was very excited when she was approached to participate in FitMuses. Christie enjoys instant messaging with her sister, putting on a fresh pair of clean socks, and eating peanut butter straight from the jar with a spoon.

Anndi McAfee has been a voice over artist for most of her life. In 1996 she was diagnosed with type 1 Gaucher Disease, a super rare lysosomal storage disorder. She is passionate about women's health and self esteem issues. Combining her passion for voice over and women's issues, in 2013 she, along with her friend Christie Insley, launched FitMuses, a mobile app for women that they can listen to as they exercise to stay motivated and inspired to live healthy and happy lives. She's a Los Angeles native and resides there with her fiance and dalmatian.