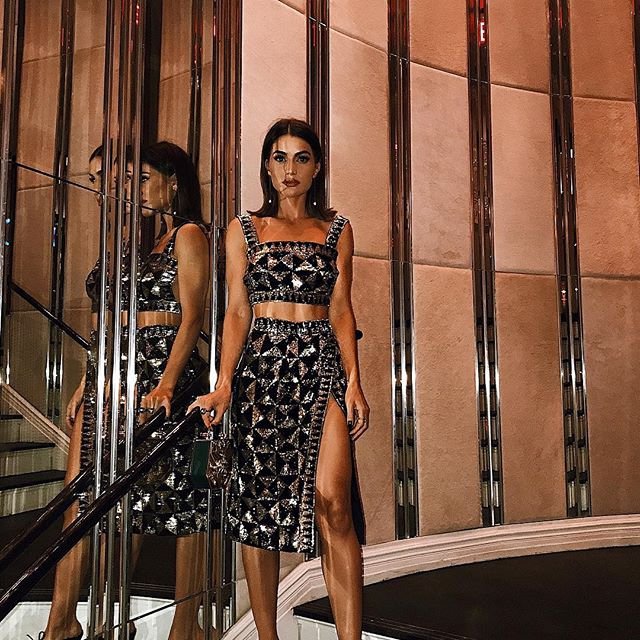 >> If you are in any way, shape, or form a claustrophobe, going backstage at a fashion show is not a good idea. The place is crawling with people -- everywhere you look, more people -- photographers and cameramen, makeup artists, hairstylists, reporters, dressers, all wielding their weapon of choice -- cameras, makeup brushes, scissors, microphones, steamers. Backstage has a major case of "let's put as many things and people as possible into a very small place" syndrome. To get anywhere, you have to wade through a sea of people.
And the models are caught up in the middle of all of it.
The makeup artist grabs one model, starts applying makeup, talking to a video crew and reporter about how the "look" for the show is accomplished. Two models loiter near the table which supports a basket of bananas, some bottled water, spools of thread, blister bandages, and Lifesaver peppermints. One picks up a mint, pops it into her mouth, and says to the other, "These things are great, they fill me up." It makes you wonder, a comment like that, if she's for real, or if she just says that to be competitive as a model, to seem more legit. Another model is crouched under the racks of clothes, drinking some water and scarfing down a burger. A zillion flashes go off, all the photographers have to chronicle the moment, because look -- models do eat after all! Actually, quite a few models crouch under the clothing racks -- the only free space available. Some text on their phones, some write in notebooks. A model has to undress in front of everyone, put on her runway clothes on to take polaroids. She looks uncomfortable. In fact, most of them look uncomfortable. Miserable, even. Flashbulbs go off everywhere, chronicling every step they take.

But it's their job, you say, to have their picture taken. Yes, I say, but I just couldn't help but feel bad. The way they crouched under the clothes racks, looking so miserable, cowering away from the cameras. Never before before has the word exploitative crossed my mind in conjunction with modeling, but it did. I felt bad watching this go on, taking their pictures. It was a very different experience than what I expected. Maybe it was just this group of models -- they seemed very green and I didn't recognize many. I didn't feel the same vibe at other shows, with other more recognizable, more experienced models -- they seemed more comfortable, happy, at ease -- they even cracked some smiles and made some funny faces. So maybe this particular group of models hadn't yet come to terms with the model lifestyle. But it was very surreal, this peek into the life of a model. And very different from my experiences at age 16, 18, or even 20. I can't say I would want that life. I can't say I would.