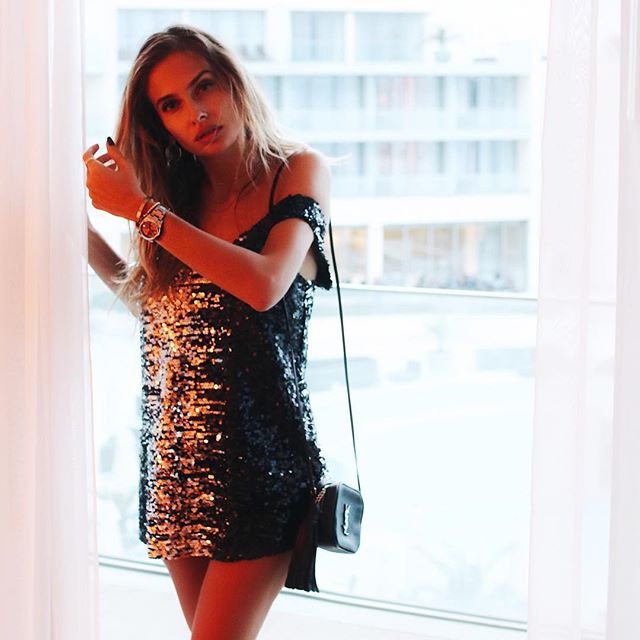 Then, there's the 23-year-old's extraordinary voice, like Billie Holiday channeling the Shangri-Las.

The combination helped push Winehouse's second album, the soaring, Phil Spector-ish "Back to Black," to the top of the British charts and many critics' year-end best lists in 2006. It was released in the U.S. in mid-March. (Watch Winehouse on loving "all or nothing" Video

But her music is not the only thing about her that garners attention. Her high-voltage personality and reputation for heavy drinking and smoking, and blunt speaking, have landed her, time and again, in the pages of the tabloid press.

It's an image Winehouse's songs do nothing to dispel. "Back to Black" spawned the hit song "Rehab," with its autobiographical refrain: "They tried to make me go to rehab/I said no, no, no."

"I listen to a lot of '60s music, but society is different now," said Winehouse, fresh from winning a Brit Award as the year's best female British act. "I'm a young woman, and I'm going to write about what I know."

It's a winning formula -- "Back to Black" is a compelling combination of the retro and the risque.

Whereas Winehouse's first album, 2003's "Frank," drew on hip-hop and jazz, "Back to Black" turns for inspiration to the dense harmonies, soaring, orchestral arrangements and heart-on-sleeve emotion of early Motown and 1960s girl groups.

If the sound is shimmering, the lyrics are lacerating. "I told you I was trouble/You know that I'm no good," she sings on "You Know I'm No Good."

Winehouse says it's the unashamed emotionalism of the decades-old music that appeals to her.

"A lot of music now is trying to be cool and like, 'Yeah, I don't really care about you' -- a really blase attitude," she said. "I think it's much nicer to be in love, and throw yourself into it, and want to lie in the road for that person.

"It's like the difference between having a dance in the middle of the party and standing around the outside with a beer bottle trying to look cool."

She says the Shangri-Las -- the girl-group behind "Leader of the Pack" and other drama-drenched '60s singles -- "pretty much had a song for every stage of a relationship: being lonely, then finding someone, being in love with them, then breaking up with the boy, then crying about it. They've got a song for every occasion. Saw me through a fair few good and bad times, definitely."

Winehouse's good and bad times have been gleefully chronicled in the British press. The tabloids have feasted on accounts of binge-drinking, drug use and feuds with fellow musicians. She is famously blunt in her assessment of her peers, once describing Dido's sound as "background music -- the background to death" and saying of pop princess Kylie Minogue, "she's not an artist ... she's a pony."

Winehouse freely acknowledges that she likes to smoke marijuana and drink -- as her occasionally ragged live performances attest -- and has admitted she is "a terrible drunk."

She has also talked about her eating disorders and told a newspaper that she has been diagnosed as manic depressive but refuses to take medication.

"Frank," a moderate hit in Britain, was followed by a creative slump during which she broke up with her boyfriend and spent $390 a week on marijuana -- a habit she has since cut back, she says.

During the same period, she suffered from debilitating writer's block -- hence the three-year gap between "Frank" and "Back to Black."

"I had writer's block for so long," she said. "And as a writer, your self-worth is literally based on the last thing you wrote. ... I used to think, 'What happened to me?'

"At one point it had been two years since the last record and (the record company) actually said to me, 'Do you even want to make another record?' I was like, 'I swear it's coming.' I said to them, 'Once I start writing, I will write and write and write. But I just have to start it.' "
'I'm just a musician'

Veteran music journalist John Aizlewood says there is a danger Winehouse's tabloid image will overshadow her music. But he thinks her recent, sober concert appearances suggest she is aware of the risk.

"I think she is trying to put the bacchanalian, debauched Amy Winehouse behind her," Aizlewood said.

Speaking to The Associated Press between magazine cover shoots in a north London photo studio, Winehouse is strikingly -- almost disappointingly -- articulate, professional and friendly, the opposite of her tabloid image.

The daughter of a taxi driver father and pharmacist mother, she grew up in the London suburbs and attended the Sylvia Young Theatre School, a factory for British music and acting moppets. She also went to the Brit School -- a performing arts academy in the "Fame" mold -- and originally was signed to "American Idol" creator Simon Fuller's 19 Management.

But she says she never sought fame.

"I'm so lucky to get to do music that I like, but I think the record company knows that I wouldn't kill myself if I didn't sell 2 million records," she said.

"When I was 18, I wasn't banging their door down. I didn't go out looking to be famous. I'm just a musician."

If it all went sour, "I would pack this in and go and be a waitress or a housewife."

Now, however, Winehouse is eager to go back into the studio to work on new material. Before that, there's the album's U.S. release and a handful of high-profile stateside dates.

Aizlewood thinks Winehouse's "fantastic soul voice" has a chance of winning over Americans.

"A lot of British bands fail in America because they give America something Americans do better -- that's why most British hip-hop has failed," he said. "But they won't have come across anything quite like Amy Winehouse."

At home there's the continuing media scrutiny, recently centering on drug use, her weight loss and an alleged feud with singer Lily Allen.

Winehouse insists she is not bothered by the attention -- "It's not nice, but it comes with the job." But it clearly rankles. She says the tabloids do not tend to run pictures of her on the many times when she is sober and calm.

"I had my eyes closed there," she tells an AP photographer snapping her picture. "You can sell that one to the tabloids and say I was drunk."
[Via cnn.com]