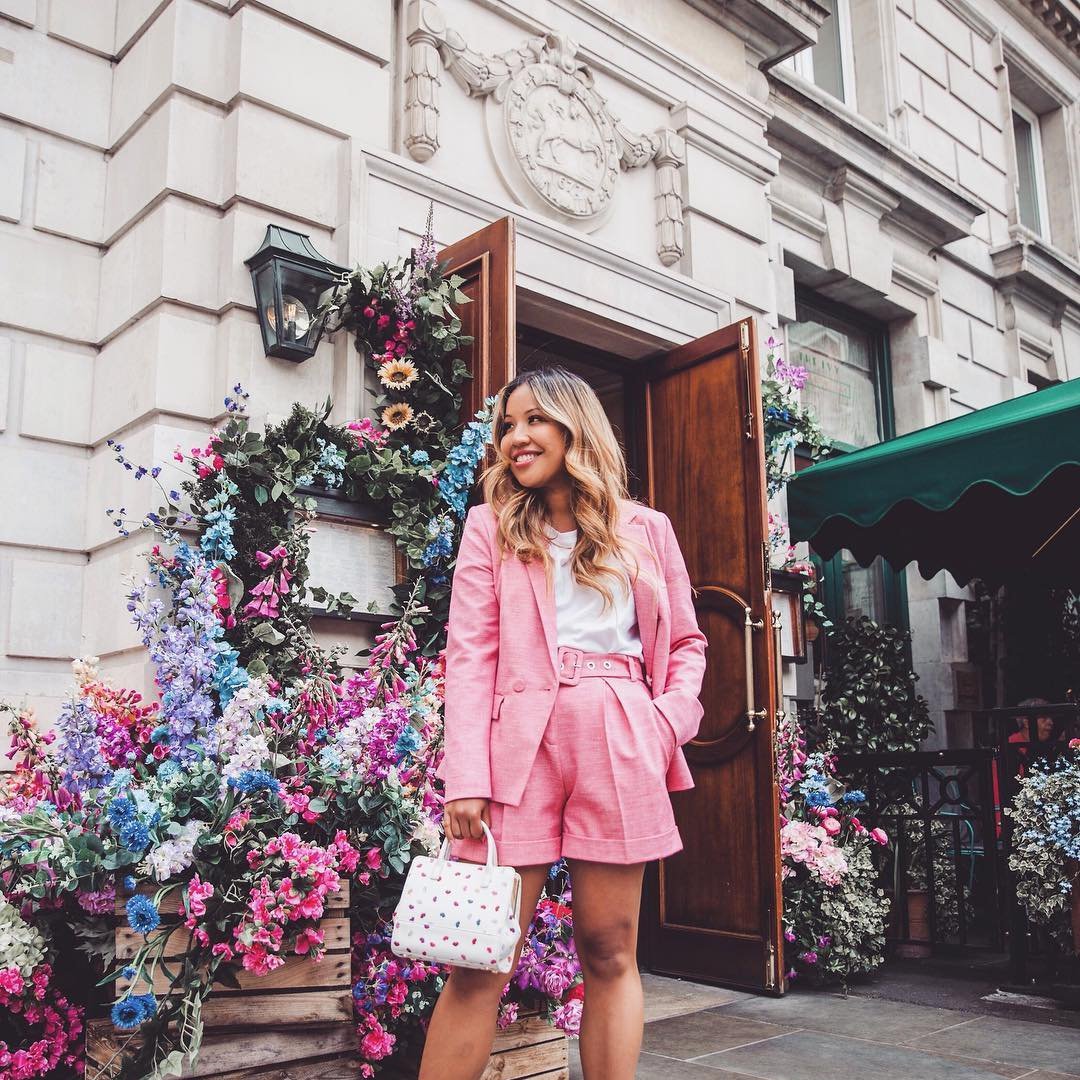 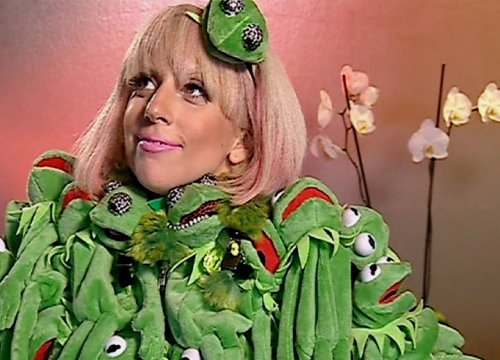 Oh dear, oh my! Wait until Miss Piggy finds out about this, that mean Gaga is really going to get what she deserved! Kaka, Gaga! Kaka! Kermit is a legend, I grew up watching and loving the Muppet Show and you can’t just take Kermit and make a dress out of him. You can’t replicate him, can’t bedazzle his eyelids and certainly can’t wear him! Thumbs up for the make-up, though, as she actually looked sweet and natural and that’s something we don’t get to see very often. 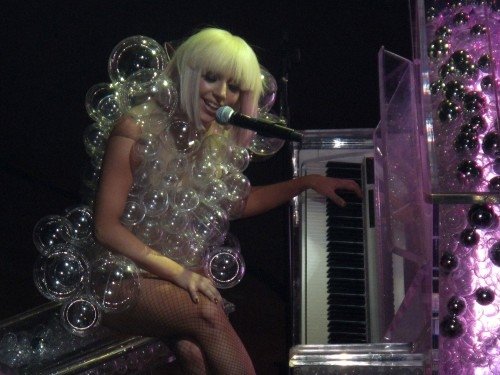 Don’t try this at home or any other place, for that matter! This dress might not be one of the craziest Lady Gaga outfits but it sure is an interesting one to mention. Did you know that she designed this one herself? Yup, that’s what happens when Gaga goes to a museum and ends up liking a thing or two there! She couldn’t get the real deal, and by that I mean millions of dollars worth Hussein Chalayan piece, so she gathered her team up and they all came up with this bubbly sensation she just couldn’t wait to show off in public! 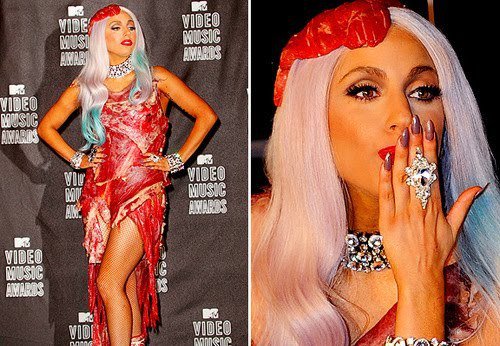 Okay, I know I’m starting to sound like a broken record, “Lady Gaga’s meat dress this, Lady Gaga’s meat dress that”, but I really think this is one of the craziest Lady Gaga outfits, if not THE absolute champion. Haters better think twice before accusing her that her style is not fresh and, just to make things clear- that is a desperate plea rather than an attempt to defend her style. Seriously guys, if you don’t watch your mouth, she might decide to wear a live one next time!

We have Giorgio Armani to thank for this amazing, very picturesque definition of what not to wear, well… probably anywhere (Halloween not included). I do, however, have to admit this is one of Gaga’s better outfits although I can’t exactly tell you why. It may have something to do with the fact that I can actually see her face… or not see her panties. 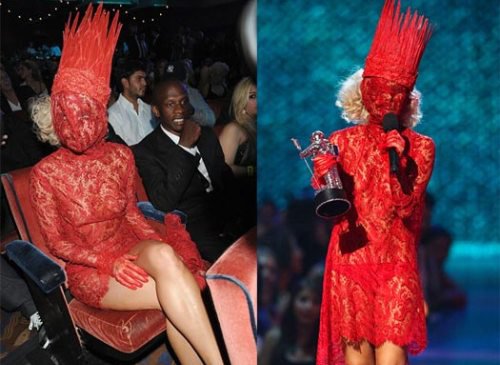 I was thinking to go with a “dress” but then I kind of changed my mind since I honestly doubt this classifies as one. Yes, the fashion world is full of surprises but this will never be a dress, no matter how weird the fashion gets. But, let’s get back to some of the craziest Lady Gaga outfits ever, this one included, of course! I still don’t understand point of covering your face when your panties and boobs are pretty much all out there but, hey – I really, really, really don’t need to understand everything! 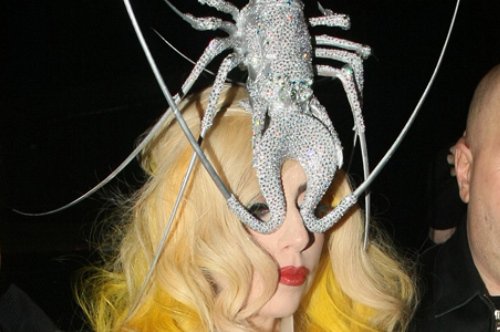 Dressed in nothing but a see-thru plastic dress and sporting a humongous sparkly lobster - now, if that doesn’t say Gaga, I don’t know what does! Interesting hairpieces are definitely her trademark and, while some of them are quite”wearable”, others (including this one ) just couldn’t get any more outrageous. Or… could they? 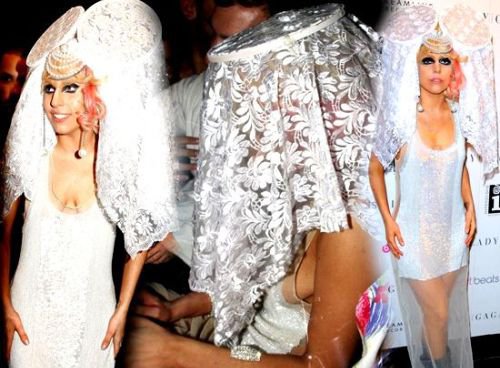 Gaga’s outfit of choice for the MTV Video Music Awards after party was this interesting white Gaultier dress which she chose to wear with the DIY medieval-ish hairpiece. Now, I don’t know what you have to say about this outfit but I think it’s kind of cool. Shocking, definitely, but still very cool. I’m a little bit disappointed with her choice to leave the bra at home and, if you manage to dig up a close-up, you’ll understand why.

Your turn now! So tell me what do you think about these pieces of “Gaga Fashion”. Are they cool, trendy, fashionably loony or totally wacked? Furthermore, are they the craziest Lady Gaga outfits ever or she actually managed to come up with something even wackier while I wasn’t looking?