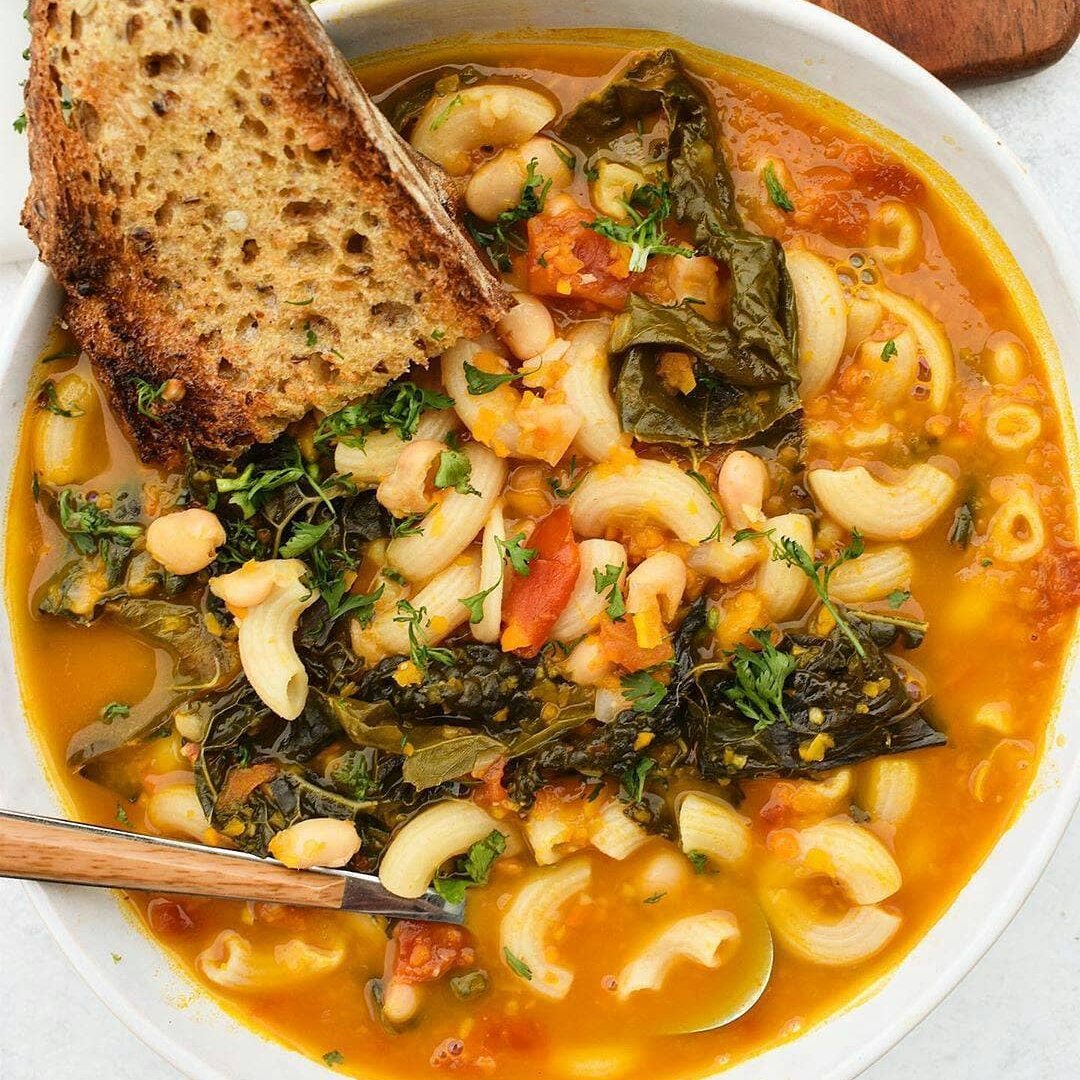 Sometimes there’s nothing more soothing than a good bowl of soup. I find soup to be a great way to get warm after playing outside in the cold or an excellent way to ease a sore throat. There are recipes for all tastes, but here are 9 comforting soup recipes I like a lot. I’m sure you will find some to be very familiar, but hopefully there are a few new ones you might like to try. I like to have ingredients on hand for an assortment of soups, since I don’t always crave the same type all the time. Different occasions call for different recipes!

This is an international soup that is absolutely yummy! Sauté a couple of minced cloves of garlic in some vegetable or olive oil until they are soft. Add a quart of chicken broth or a quart of water and some chicken bullion cubes. Vegetable bullion cubes can be substituted as well. Bring all of this to a boil and then drop in a package of frozen Chinese dumplings or wontons. A quart of broth will sufficiently hold 12 of either dumplings or wontons. Simmer soup for 10 minutes more and then add a cup of snow peas, a quarter cup of sliced green onions, a tablespoon of soy sauce and a cup of fresh spinach. A teaspoon of freshly grated ginger can also be added, but it gives the soup a bit of a bite. Simmer a few more minutes and then serve.

Basically, this is creamy chicken soup with slices of tortillas dropped into it. The main difference in taste is created by the Worcestershire sauce, chili powder, and cumin. After the chicken broth is added to the can of cream of chicken soup and brought to a simmer, toss in a tablespoon of Worcestershire sauce and a teaspoon of the cumin and chili powder. Tortilla strips and some shredded cheddar cheese are added to the soup right before it is served.

The beans for this soup will have to be soaked overnight. If you can’t find a bag with 15 different beans in it, there are also ones with 9 beans instead. The directions for making the soup is usually on the back of whichever bag of beans you buy. I like to use lot of garlic and onions in mine, plus a can or two of stewed tomatoes. Some recipes call for tomato soup or juice instead of actual tomato chunks. I like the chunks and also a bit of chili powder to go with the salt and pepper I add when the soup is finished cooking. The beans take about 5 hours to become fully cooked.

This soup is one of my kids’ favorites, due to all the cheese in it. Peel and dice 5 big potatoes and chop up a large onion. Put all of this in a pot with about 7 to 8 cups of water. Simmer for 20 minutes and then add in; a tablespoon of butter, 4 cups of milk – preferably whole – and a half of a box of Velveeta Cheese. It helps to chop up the cheese into very small pieces so it will melt quicker. Simmer the soup for about 5 minutes more after adding in these last ingredients. Garnish a bowl of soup with some crumbled bacon for a little more flavor.

Most of the recipes I’ve come across show pictures of split pea soup that is very smooth and monochromatic. I’m all about adding carrot chunks to my split pea soup, just to break away from the typical lime green color associated with this soup. I have seen a few other recipes that call for carrots as well, but the soup is also put through a blender before it is served. I don’t puree mine, just so I can enjoy the chunkiness of the soup. It’s a texture thing. I have a hard time eating canned tomato soup that is nothing but pureed tomatoes too. I still feel the need to chew it!

This recipe changes every time for me. I tend to use whatever veggies I have on hand, so the ingredients aren’t set in stone. I try to always add in an onion, a few cloves of garlic and some salt and pepper. The rest of the ingredients vary. I’ve added zucchini, cabbage, green beans, spinach leaves, and even tomatoes. Each veggie adds its own flavor, so the combinations are endless. Basil and parsley are great spices to use with any of these vegetables. You’ll just have to make sure to add enough water for everything to cook in. The amount of water used will determine how thick the soup ends up being.

Zucchini doesn’t have a strong flavor on its own, so it is perfect for adding to just about any soup. I like to shred my zucchini, but you can also slice them very thin for this recipe. Cook 3 to 4 sliced or shredded zucchini with a large onion and a quarter cup of butter until the veggies are soft. Add in a can of cream of chicken or cream of celery soup, plus a can of water and stir well. Toss in some sweet basil, salt, and pepper to taste. I’ve even added shredded cheese to this same recipe and it added even more flavor to it.

This creamy soup has lots of butter, whipping cream, and almonds in it. I think these ingredients are what make this soup so scrumptious! A quarter cup of melted butter is used to sauté all the veggies, almonds, and rice before cooking. The basic ingredients include a half cup of each; onions, carrots, celery, and almonds. Only a quarter cup of raw wild rice is used with the combination of veggies and almonds. All of these ingredients are simmered in 4 and a half cups of soup stock for a little over an hour. 3 to 4 teaspoons of cornstarch is dissolved in the cream or half and half and then stirred into the soup stock. Eventually the soup will thicken slightly. This is a very hearty soup!

I like to create the broth for chicken noodle soup by boiling up some chicken breasts that are still on the bone. I’ll remove the bones and random non-meat parts before adding the homemade noodles to the boiling broth. If I don’t have chicken breasts to use, chicken bullion cubes work well too. Toss in some carrot slices, as well as a handful of diced celery and onions and boil these ingredients for a few minutes before adding the noodle dough. It takes about 10 to 12 minutes for the noodles to fully cook.

I hope these 9 comforting soup recipes sound like something you might enjoy trying for yourself. My family is big on making soup, especially during the colder months. In my opinion, there’s nothing like a big bowl of soup to help me feel warm and toasty on the inside. Do you have some soup recipes that you or your family enjoys during the winter time?